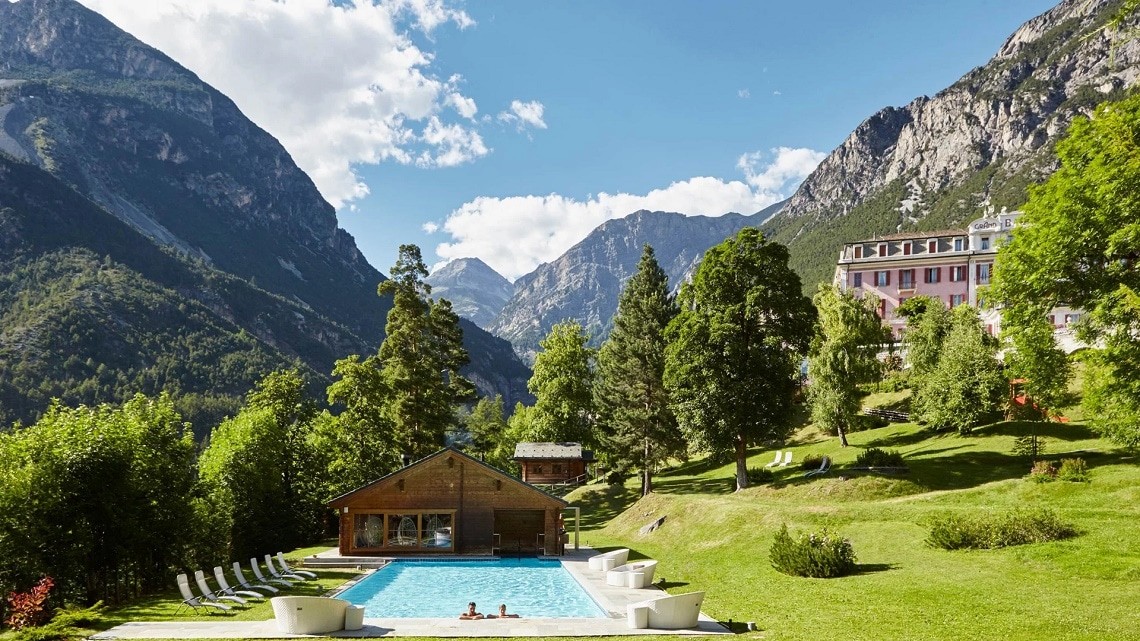 Art Nouveau jewel immersed in the nature of the Stelvio National Park, the hotel has welcoming, spacious and bright rooms, with bathrooms equipped with whirlpool tubs with thermal water and chromotherapy.

Each of the rooms of the Bagni Nuovi enjoys a special view that varies according to the exposure, overlooking Bormio, Valdidentro, the Stelvio cliffs. Most of the bathrooms in the rooms, with the exception of the Classic rooms, are equipped with a whirlpool bath with thermal water, some with chromotherapy. The Comfort is equipped with an enchanting bathroom in white Carrara marble with whirlpool tub. The Alpin Room differs for a large terrace or a large size or for direct access to the Stelvio Garden. The Superior Junior Suites are rooms equipped with all comforts, some can accommodate up to 3 people. The Superior Suites, on the other hand, can accommodate up to 4 people. The jewel of the structure is the Royal Suite, built in 1917 for the living room of Vittorio Emanuele III, it is configured as a single large room divided by Corinthian columns, with thermal hydromassage and park view.

The Thermal Path is surrounded by the luxuriant nature of the Stelvio National Park, the largest thermal garden in the Alps with over thirty different thermal practices, in a large and sunny garden. In the Giardini di Venere, you can immerse yourself in waters that already gush from the earth, abandoning yourself to pleasure and rediscovering the link with Nature in the largest outdoor thermal park in the Alps with seven outdoor pools, with different characteristics, and two saunas in hut. From here you enter the Grotto of Neptune which connects the garden with the internal paths, a walkway inside a tunnel where hot and cold alternate, promoting body circulation and the elimination of skin impurities. Inside the cave there are different wellness areas: Sibyl’s Cave, Council of the Gods, Minerva’s Sauna, Deluge and Diamonds of the Gods, Mercury’s Path, Kneipp’s Path, Aeolus’ Soffioni for a totally detoxifying result. I Bagni di Giove, built under the arched vaults of the basement of the Grand Hotel Bagni Nuovi, is an indoor aquatonic path where the purifying and relaxing action of the thermal water promotes complete physical regeneration through the detoxification of the body. Here, since the 19th century, the first thermal center of Bagni Nuovi was located. The Baths of Jupiter are divided into: Volcano’s Pool, Olympus Waterfalls, Vesta’s Sauna, Juno’s Pool, Mars’ Rest, Vapori dell’Olimpo, Kingdom of Pluto and the Relaxation Room of the Gods. The Baths of Hercules are the hottest area of the Bagni Nuovi thermal baths. The large Sala del Braciere is characterized by a magnificent panoramic view that sweeps over the Giardini di Venere and the Stelvio Park. The Sauna delle Colonne is a high-temperature flavored biological sauna and the Hammam a decongestant Turkish bath. Take the opportunity to participate in one of the regenerating events that are organized throughout the day led by the wellness master. Also at the Alpin Spa, it is possible to book innovative massages and treatments for a perfect remise en forme.

The “Salone dei Balli” is the historic restaurant of the Grand Hotel Bagni Nuovi, where the chef creatively proposes local dishes, revisited in an international key. The restaurant is open every day by reservation. On the balcony overlooking the spa park, there is the “Light Café” which offers a cafeteria and bar service, where it is possible to have lunch and dinner while remaining in a bathrobe and without leaving the thermal path, tasting light dishes created with the high quality of the products. typical Valtellina. On the occasion of relaxing evenings under the stars, the Light Cafè remains open on Friday evening until 21:00 and on Saturday evening until 22:30. At “Caffé Ugo’s”, the barman awaits you for great cocktails, spirits or simply to offer you the aromatic selection of teas and herbal teas.

You need a
personalized quote

Register and stay up to date
on our offers and on the latest Nature and Wellness news.